Throwing a summer party can seem like a good idea beforehand, but then the guests start arriving and you realise that there are a hundred things that you’ve forgotten to do. Planning is everything when hosting a shindig. Avoid these common mistakes and your summer party is certain to go smoothly.

Not following up invites

It’s worth knowing exactly who is coming and who’s not before the event so that you can cater for everyone. This means following up on invites. Providing that you have all your attendees on Facebook, it’s recommended that you create a Facebook page so that people can mark whether they’re coming or not. This is also a great place to put important details (e.g. your address, time of arrival, fancy dress them) so that everyone is on the same page.

Being frugal on seating

Not having enough seating available will result in people awkwardly standing about. We all feel more comfortable with a seat, especially if we’re meeting new people. Beg, steal and borrow any chairs that you can – it’s better to have too many.

Ignoring the possibility of rain

In case it isn’t brilliant sunshine, it’s good to have some shelter for guests to go. You may not want everyone crammed inside your kitchen and living room, so consider getting a marquee. Companies such as Fews Marquees Marquee Hire may save you money by not having to buy one. Make sure to also have a backup plan if it’s too wet to barbecue.

Not having enough food

Nobody likes a party in which there’s not enough food to go around. Load up on meats and cakes and coleslaw – what doesn’t get eaten can be eaten as leftovers for the week after. Use sites such as Coupon Mum to search for discounts if you’re hosting a big party on a budget. One option could be to get everyone to bring food along, so that you’re guaranteed as much food as you have guests.

Alternatively, asking people to bring their own food – and ending up with 5 potato salads

That said, if you are getting your guests to bring along food, try and discuss it first so that you don’t end up with five of the same of dish. You want to have an exciting buffet that gives people choice. 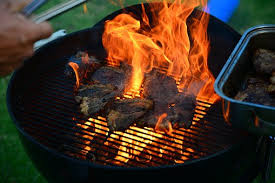 Isolating whoever is on barbeque duty

If your barbecue is right down the bottom of the garden and everyone is likely to congregate at the top, consider relocating the Barbie, unless you want to deliberately segregate the chef from everybody (useful for that over-opinionated uncle at a family get-together).

Not introducing guests to one another

There’s nothing worse than a party in which nobody’s talking to one another. If your guests aren’t likely to know each other, it’s your job as host to introduce them all the moment they step through the door. This will break the ice from the onset and prevent cliquey groups from forming. If you’re too busy cooking, try and get your partner or someone else to do this introducing for you. You don’t need to be hovering around every conversation checking everyone’s alright but you shouldn’t let your guests fend for themselves either.